Ever wondered what it’s like to work inside Syria’s notorious Al-Hawl refugee camp? 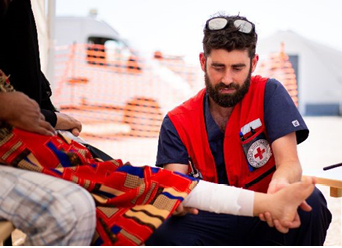 Miller spoke to The Sydney Morning Herald  from Beirut about his day-to-day experiences working in the refugee camp with the International Committee of the Red Cross. As the only field hospital servicing the camp, it has treated more than 2000 patients since opening on May 30, and Miller said it was treating “a huge amount” of children.

A boy, 10-year-old Omar, was in a wheelchair when he arrived at the hospital, “He was one of the first patients to undergo surgery. He had an old fracture. We removed a piece of dead bone and fixed his leg and put him in a cast and he’s soon to be walking. “Those moments are very special where you can see the difference you’ve made,” Miller said.

After a month in the camp, he was on his way home to Melbourne, where he works at The Alfred hospital. Read the whole article in the Sydney Morning Herald.

The road to paradise: Developing Emergency Medicine in the highlands of Papua New Guinea